Two weeks into our stay, it was finally our chance to take the full trip around the island. We were told that it is a 4-hour hike, so we were excited to see it for ourselves.

The image above is a map that is posted at at the ferry dock for incoming travelers. We were told that the south loop is roughly 7 miles round trip. We had gotten very familiar with the trip to the ferry and back to the Tea Garden, now we wanted to see the western side of the island. 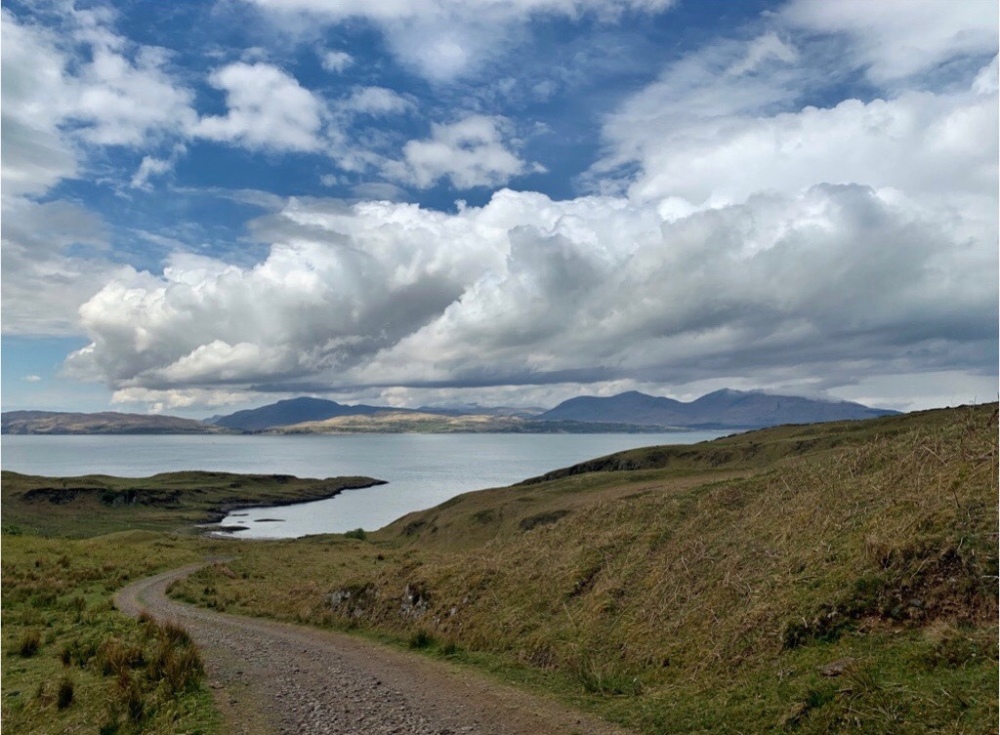 We started north of Lower Gylen and the castle and made our way past the shore line toward Ardmore. The shoreline is beautiful and full of interesting rock formations. It’s fascinating to see the different types of structures and the grooves that have been formed over the years.

As we approached Ardmore we saw a small sign for island made soap. Though it sounds appealing we move on, we were on a mission. Up and around the back of the house is a small trail through the spring with yellow flowers lining the path as you make you way to the opening at the top. As we made our way upwards, we were greeted by a beautiful image of the island of Mull in the distance and a full view of the west coast of Kerrera. We moved forward taking in the breathtaking scenery as we approached Barnabuck. This was the first time we saw trees since we arrived as most of the island greenery has been trimmed short by sheep. The “full” loop doesn’t include the northern peninsula but we wanted do the traditional route first (Not to mention we took the Jeep to the north end just the other night).

As we moved on past Balliemore, we see the house that famously has piglets and pet lambs. We will have a chance to feed them over cocktails one night before the month is over. As we approach their land we see a small colorful desk. We peep in and see dozens of eggs with a note that reads “eggs for sale. £1.50. Please help yourselves…” I love island life. 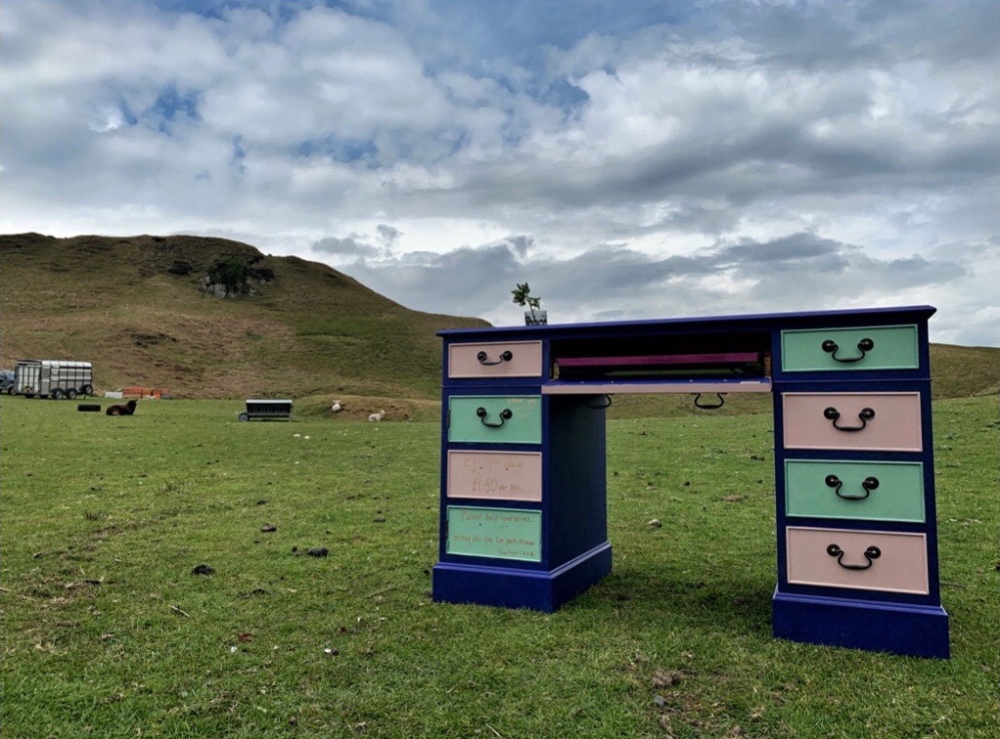 We turned the corner to see the old school which is currently being turned into the community center. A process that our host family is heavily involved with.

We carried on and saw a familiar sight: the ferry. Here is a cute telephone booth with postcards of Kerrera. 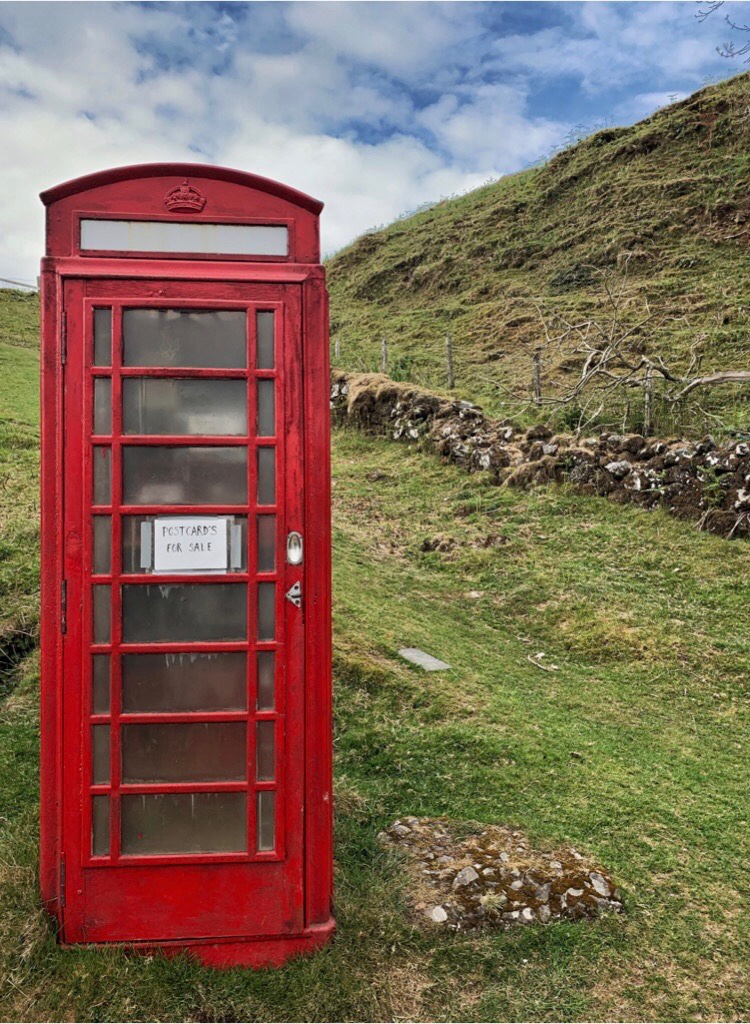 We know this leg of the walk as we have done it many times. Just past the Horseshoe Cottages, we were told that there is a forest on the southeast peninsula. We were feeling adventurous, so we decided to go off of the path in search of this hidden area. Here is the only place on the island you can see the wild deer. 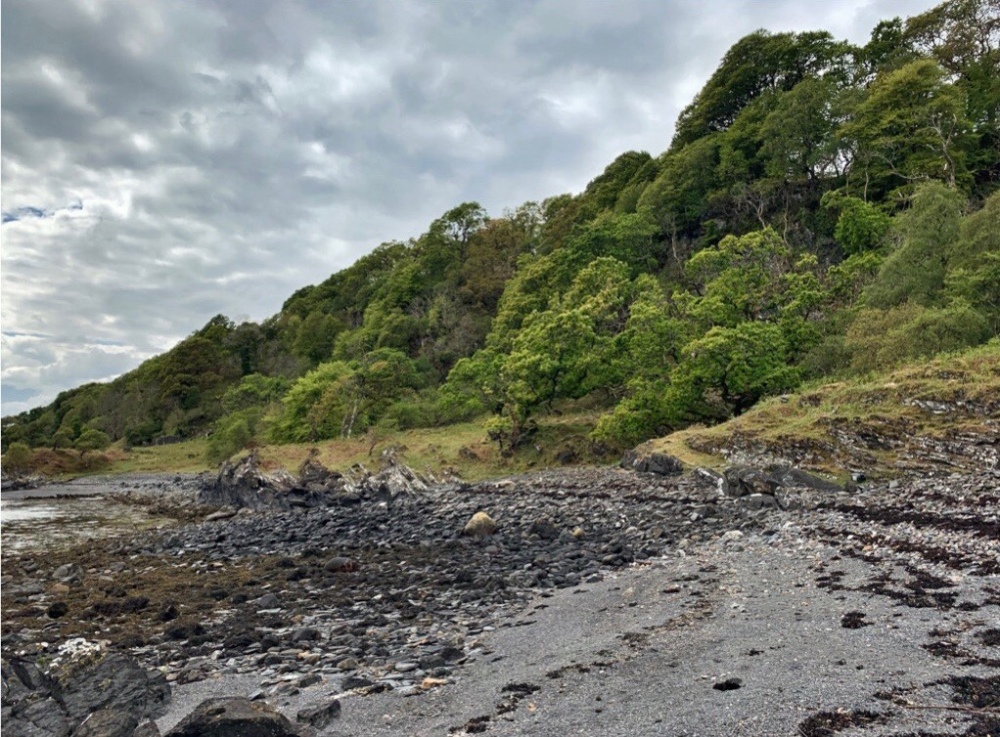 Most of the hike was fairly tame until we reached the forest. Barely a path in sight. Just a worn down area from locals (and sheep) walking about. This is the first time we truly didn’t have a sense of the residents on the island. Of course until you see a random swing or ATV path.

We went deeper. The views are spectacular and after 4 hours of hiking we started to feel the fatigue in our legs.

We made our way round the bend and saw the infamous cave. Apparently the last travelers had a run-in with some very territorial foxes last month but there were none in sight today. The castle was now in view, which meant that home is just around the corner.

We made it. A true lap around the island. We finally have a lay of the land. With our additional detour we were home in just under 5 hours, confident we would have made the lap in 3.